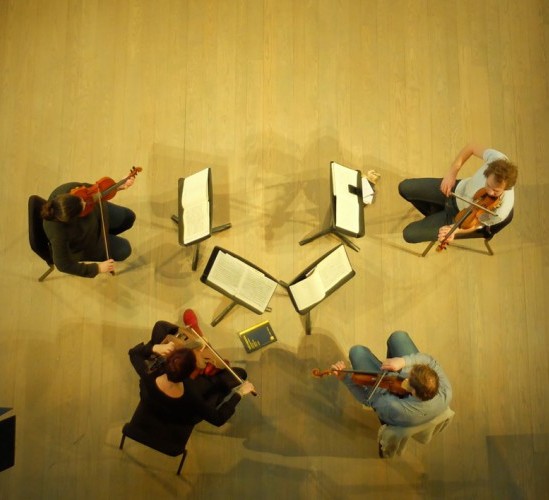 Formed in 2007, the Edding Quartet quickly became one of the references for the interpretation of classical and romantic repertoire for string quartet, offering a fine and intelligent reading of these often heard works. Their use of historical instruments, particularly with the use of gut strings gives them a warm and captivating sound that has captured the audiences.

Since their creation, the Edding Quartet has also committed to playing chamber music for strings and winds from the 18th and 19th centuries. They founded the ensemble ‘Northernlight’ together with the clarinetist Nicola Boud, bassoonist Julien Debordes, horn player Nicolas Chedmail, and double bassist Damien Guffroy.

The first two discs recorded by the Edding Quartet featuring the Haydn Stringquartets op. 77 and op. 103 and Mozarts K.421 and the Quintet for clarinet (served by the incomparable sound of Nicola Boud), released in 2009 and 2010 by the Dutch label Et’Cetera, were met with great enthusiasm by the international press.

The third release in their discography, which will be released in September 2014 on the Phi label (Outhere music), is devoted to one of the masterpieces of the time, the Octet D. 803 of Franz Schubert. Since 2014, the Eddings thus have chosen to concentrate on later repertoire, including Schubert, Brahms and Mendelssohn, but also on the late quartets of Beethoven. The second part of this ambitious project is previewed for spring 2015, when the quartet will record the op. 130 quartet of Beethoven for the label Phi.
« Playing on historical instruments, the Edding Quartet continues to surprise us with their beautiful sound and distinctive yet natural style. The ensemble’s virtuosity has to be heard to be believed.. »
Classic Magazine